Practice Management Instructor/Consultant Linda D’Spain is on the mend. Last summer she suffered a serious fall that fractured her pelvis. A casualty of warfare, she might say. But not the type you would think.

A couple of years ago, Linda and her husband Ron, left the city for a more relaxed life in a rural community in the Texas Hill Country. They built a new home in a quiet, picturesque neighborhood behind a big ranch with lots of interesting wildlife. Birds flutter over bird feeders on her back patio. Deer roam freely across the landscape. Being close to nature has its perks. Linda and Ron enjoy hosting outdoor gatherings from time to time, where they enjoy entertaining, back yard grilling, and visiting with neighbors and friends. 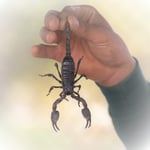 The downside of country living are the unwelcome visitors. Linda has learned a thing or two about country critters since they moved into their new home. One major concern is Scorpions. They like to sneak inside and hide in dark places like in closets, shoes, and furniture – including beds! If you have never encountered a real live scorpion, count your blessings. These huge creepy looking bugs pack a mean venom punch in their tails.

“We live on scorpion hill,” she said. “A professional exterminator comes out regularly, but you have to be proactive to keep the scorpions from getting inside the house.” Linda is deathly allergic to insect stings, so she and Ron canvass the area regularly with their scorpion lights and wasp spray.

Last June during a dinner gathering at their home, a guest spotted an unfamiliar visitor out in the distance through the back window. A huge cat stood completely still except for an agitated tail wagging back and forth. Was it a cougar? A mountain lion? They decided because of its features and coloring, it must be a bobcat.

The big cat seemed to be observing something on their patio. Linda’s domestic Tuxedo cat, Patches was sitting still on a patio table staring back at the large animal. Neither cat moved for what seemed like several minutes, and, eventually, the bobcat moved on down into the pasture. A close call for sure since bobcats prey on small animals like livestock, deer, rabbits, and rodents. They are fast, powerful, and territorial.

Then one late summer evening, Linda was outside roaming around her patio slaying scorpions. She had an ultraviolet flashlight - also known as a Scorpion Light - in one hand and a pesticide wand in the other.

“Scorpions are nocturnal. The Scorpion Light provides a soft UV light that makes the scorpions glow a neon bluish / green color in the dark, so they are easier to see,” she said. As she was roaming around the perimeter, she heard a deep growl, froze, and slowly turned around to see a bobcat lurking in the distance. 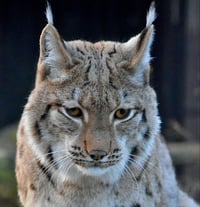 She panicked, thinking that if she did not retreat quickly, the big cat might get her. She tried to remain calm. Her heart began racing and pulse elevated. The only way to get back to the house quickly was through the garage, which was closed and locked. Linda dashed toward the external keypad to raise the door so she could get inside to safety.

“I was shaking so badly I was afraid I would get locked out if I entered the code wrong more than twice.” Steadying herself, she quickly punched in the numbers and the door began to raise. She immediately ducked and ran toward the kitchen door, and while in route, she slipped causing her legs to split wide and down she went dropping the flashlight and wasp spray. She screamed but there was no one home to help. Her flight or fight instinct kicked in and she somehow managed to get up and steady herself enough to get into the house and close the garage door.

“I was very sore, and I couldn’t stand. Once the adrenaline rush was gone, the pain was excruciating.” Linda called her husband and asked him to go by his brother’s house on his way home to borrow his crutches. Afraid she had broken her pelvis, her brother-in-law convinced them to call EMS to transport her to the ER later that evening to get checked out.

The hospital took x-rays and did a CT scan. Her pelvis appeared non-displaced and no fracture was seen. Even though she did not have a scratch on her, she had pulled groin muscles; the swelling and bruising were extremely uncomfortable, but her body would heal on its own. For the next several weeks she would be confined to a wheelchair and crutches with pain management and no weight-bearing activities.

During her follow-up with her family doctor, she reported unrelenting pain, worried there might be something more that was not caught in the ER imaging. She was referred to an orthopedic surgeon who took an MRI of her pelvis. A non-displaced fracture of the inferior pubic ramus was found but the surgeon said it did not require surgery - good news! However, the fracture had a 12-week healing period with rest, pain medication and no weight-bearing activities. That was not easy for Linda, as she is very active and independent, but she quickly learned how to milk the situation and allow her sweet husband Ron to wait on her and he patiently treated her like a queen.

Linda is feeling much better these days. Reflecting on her experience she said it was tragic, but by the grace of God she is okay and now much more attentive outside. Her advice when going out, whether in the city or in the county is to go early and go in pairs, have your phone handy, focus on the current situation, and have a plan if you need to get away quickly.

“Always be aware of your surroundings and don’t think it won’t happen to you because it can!”

Explore our site
Our Office